In 1950, five years after the founding of the United Nations, world population was estimated at around 2.6 billion people. It reached 5 billion in 1987and 6 billion in 1999.  In October 2011, the global population was estimated to be 7 billion. A global movement "7 Billion Actions" was launched to mark this milestone. The world’s population is expected to increase by 2 billion persons in the next 30 years, from 7.7 billion currently to 9.7 billion in 2050 and could peak at nearly 11 billion around 2100.

This dramatic growth has been driven largely by increasing numbers of people surviving to reproductive age, and has been accompanied by major changes in fertility rates, increasing urbanization and accelerating migration. These trends will have far-reaching implications for generations to come.

China and India: most populated countries

Sixty-one per cent of the global population lives in Asia (4.7 billion), 17 per cent in Africa (1.3 billion), 10 per cent in Europe (750 million), 8 per cent in Latin America and the Caribbean (650 million), and the remaining 5 per cent in Northern America (370 million) and Oceania (43 million). China (1.44 billion) and India (1.39 billion) remain the two largest countries of the world, both with more than 1 billion people, representing 19 and 18 per cent of the world’s population, respectively. Around 2027, India is projected to overtake China as the world’s most populous country, while China’s population is projected to decrease by 31.4 million, or around 2.2 per cent, between 2019 and 2050. 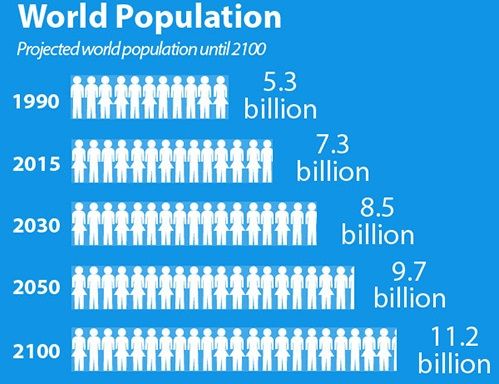 The world population is projected to reach 8.5 billion in 2030, and to increase further to 9.7 billion in 2050 and 11.2 billion by 2100. As with any type of projection, there is a degree of uncertainty surrounding these latest population projections. These figures are based on the medium projection variant, which assumes a decline of fertility for countries where large families are still prevalent, as well as a slight increase of fertility in several countries with fewer than two children per woman on average. Survival prospects are also projected to improve in all countries.

More than half of global population growth between now and 2050 is expected to occur in Africa. Africa has the highest rate of population growth among major areas. The population of sub-Saharan Africa is projected to double by 2050. A rapid population increase in Africa is anticipated even if there is a substantial reduction of fertility levels in the near future.  Regardless of the uncertainty surrounding future trends in fertility in Africa, the large number of young people currently on the continent, who will reach adulthood in the coming years and have children of their own, ensures that the region will play a central role in shaping the size and distribution of the world’s population over the coming decades.

In sharp contrast, the populations of 55 countries or areas in the world are expected to decrease by 2050, of which 26 may see a reduction of at least ten per cent. Several countries are expected to see their populations decline by more than 15 per cent by 2050, including Bosnia and Herzegovina, Bulgaria, Croatia, Hungary, Japan, Latvia, Lithuania, Republic of Moldova, Romania, Serbia, and Ukraine. Fertility in all European countries is now below the level required for full replacement of the population in the long run (around 2.1 children per woman), and in the majority of cases, fertility has been below the replacement level for several decades.

Future population growth is highly dependent on the path that future fertility will take. According to the World Population Prospects (2019 Revision), global fertility is projected to fall from 2.5 children per woman in 2019 to 2.2 in 2050.

Overall, significant gains in life expectancy have been achieved in recent years. Globally, life expectancy at birth is expected to rise from 72.6 years in 2019 to 77.1 years in 2050.  While considerable progress has been made in closing the longevity differential between countries, large gaps remain. In 2019, life expectancy at birth in the least developed countries lags 7.4 years behind the global average, due largely to persistently high levels of child and maternal mortality, as well as violence, conflict and the continuing impact of the HIV epidemic.

International migration is a much smaller component of population change than births or deaths. However, in some countries and areas the impact of migration on population size is significant, namely in countries that send or receive large numbers of economic migrants and those affected by refugee flows. Between 2010 and 2020, fourteen countries or areas will see a net inflow of more than one million migrants, while ten countries will see a net outflow of similar magnitude.

The world’s population is expected to increase by 2 billion persons in the next 30 years, from 7.7 billion currently to 9.7 billion in 2050, according to a new United Nations report launched today.

The World Population Prospects 2019: Highlights, which is published by the Population Division of the UN Department of Economic and Social Affairs, provides a comprehensive overview of global demographic patterns and prospects. The study concluded that the world’s population could reach its peak around the end of the current century, at a level of nearly 11 billion.

The report also confirmed that the world’s population is growing older due to increasing life expectancy and falling fertility levels, and that the number of countries experiencing a reduction in population size is growing. The resulting changes in the size, composition and distribution of the world’s population have important consequences for achieving the Sustainable Development Goals (SDGs), the globally agreed targets for improving economic prosperity and social well-being while protecting the environment.

The world’s population continues to increase, but growth rates vary greatly across regions

The new population projections indicate that nine countries will make up more than half the projected growth of the global population between now and 2050: India, Nigeria, Pakistan, the Democratic Republic of the Congo, Ethiopia, the United Republic of Tanzania, Indonesia, Egypt and the United States of America (in descending order of the expected increase). Around 2027, India is projected to overtake China as the world’s most populous country.

The population of sub-Saharan Africa is projected to double by 2050 (99% increase). Regions that may experience lower rates of population growth between 2019 and 2050 include Oceania excluding Australia/New Zealand (56%), Northern Africa and Western Asia (46%), Australia/New Zealand (28%), Central and Southern Asia (25%), Latin America and the Caribbean (18%), Eastern and SouthEastern Asia (3%), and Europe and Northern America (2%).

The global fertility rate, which fell from 3.2 births per woman in 1990 to 2.5 in 2019, is projected to decline further to 2.2 in 2050. In 2019, fertility remains above 2.1 births per woman, on average, over a lifetime in sub-Saharan Africa (4.6), Oceania excluding Australia/New Zealand (3.4), Northern Africa and Western Asia (2.9), and Central and Southern Asia (2.4). (A fertility level of 2.1 births per woman is needed to ensure replacement of generations and avoid population decline over the long run in the absence of immigration.)

Mr. Liu Zhenmin, United Nations Under-Secretary-General for Economic and Social Affairs, said the report offers a roadmap indicating where to target action and interventions. “Many of the fastest growing populations are in the poorest countries, where population growth brings additional challenges in the effort to eradicate poverty, achieve greater equality, combat hunger and malnutrition and strengthen the coverage and quality of health and education systems to ensure that no one is left behind.”

In most of sub-Saharan Africa, and in parts of Asia and Latin America and the Caribbean, recent reductions in fertility have caused the population at working ages (25-64 years) to grow faster than at other ages, creating an opportunity for accelerated economic growth thanks to a favourable population age distribution. To benefit from this “demographic dividend”, governments should invest in education and health, especially for young people, and create conditions conducive to sustained economic growth.

Life expectancy at birth for the world, which increased from 64.2 years in 1990 to 72.6 years in 2019, is expected to increase further to 77.1 years in 2050. While considerable progress has been made in closing the longevity differential between countries, large gaps remain. In 2019, life expectancy at birth in the least developed countries lags 7.4 years behind the global average, due largely to persistently high levels of child and maternal mortality, as well as violence, conflict and the continuing impact of the HIV epidemic.

The world’s population is growing older, with the age group of 65 and over growing the fastest

By 2050, one in six people in the world will be over age 65 (16%), up from one in 11 in 2019 (9%). Regions where the share of the population aged 65 years or over is projected to double between 2019 and 2050 include Northern Africa and Western Asia, Central and Southern Asia, Eastern and South-Eastern Asia, and Latin America and the Caribbean. By 2050, one in four persons living in Europe and Northern America could be aged 65 or over. In 2018, for the first time in history, persons aged 65 or above outnumbered children under five years of age globally. The number of persons aged 80 years or over is projected to triple, from 143 million in 2019 to 426 million in 2050.

The potential support ratio, which compares numbers of persons at working ages to those over age 65, is falling around the world. In Japan this ratio is 1.8, the lowest in the world. An additional 29 countries, mostly in Europe and the Caribbean, already have potential support ratios below three. By 2050, 48 countries, mostly in Europe, Northern America, and Eastern and South-Eastern Asia, are expected to have potential support ratios below two. These low values underscore the potential impact of population ageing on the labour market and economic performance, as well as the fiscal pressures that many countries will face in the coming decades as they seek to build and maintain public systems of health care, pensions and social protection for older persons.

Since 2010, 27 countries or areas have experienced a reduction of one per cent or more in the size of their populations. This drop is caused by sustained low levels of fertility. The impact of low fertility on population size is reinforced in some locations by high rates of emigration. Between 2019 and 2050, populations are projected to decrease by one per cent or more in 55 countries or areas, of which 26 may see a reduction of at least ten per cent. In China, for example, the population is projected to decrease by 31.4 million, or around 2.2 per cent, between 2019 and 2050.

Between 2010 and 2020, fourteen countries or areas will see a net inflow of more than one million migrants, while ten countries will see a net outflow of similar magnitude. Some of the largest migratory outflows are driven by the demand for migrant workers (Bangladesh, Nepal and the Philippines) or by violence, insecurity and armed conflict (Myanmar, Syria and Venezuela). Belarus, Estonia, Germany, Hungary, Italy, Japan, the Russian Federation, Serbia and Ukraine will experience a net inflow of migrants over the decade, helping to offset population losses caused by an excess of deaths over births.

“These data constitute a critical piece of the evidence base needed for monitoring global progress toward achievement of the Sustainable Development Goals by 2030”, says John Wilmoth, Director of the Population Division of the United Nations Department of Economic and Social Affairs. “More than one third of the indicators approved for use as part of the global monitoring of the SDGs rely on data from World Population Prospects,” he added.