Solving the Equation: The Variables for Women’s Success in Engineering and Computing

Solving the Equation: The Variables for Women’s Success in Engineering and Computing asks why there are still so few women in the critical fields of engineering and computing — and explains what we can do to make these fields open to and desirable for all employees.

More than ever before, girls are studying and excelling in science and mathematics. Yet the dramatic increase in girls’ educational achievements in scientific and mathematical subjects has not been matched by similar increases in the representation of women working as engineers and computing professionals. Just 12 percent of engineers are women, and the number of women in computing has fallen from 35 percent in 1990 to just 26 percent today. 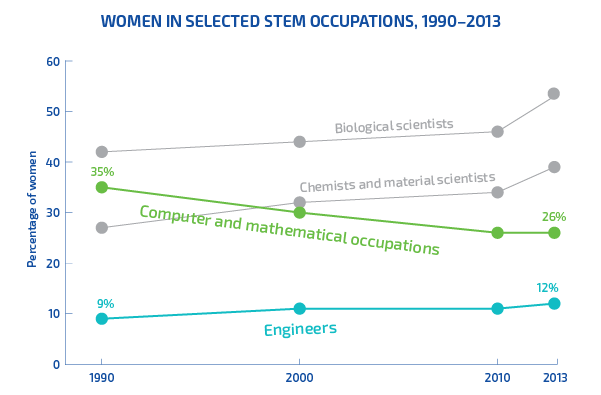 Diversity Is Good for Business

The representation of women in engineering and computing matters. Diversity in the workforce contributes to creativity, productivity, and innovation. Everyone’s experiences should inform and guide the direction of engineering and technical innovation.

In less than 10 years, the United States will need 1.7 million more engineers and computing professionals. We simply can’t afford to ignore the perspectives or the talent of half the population. 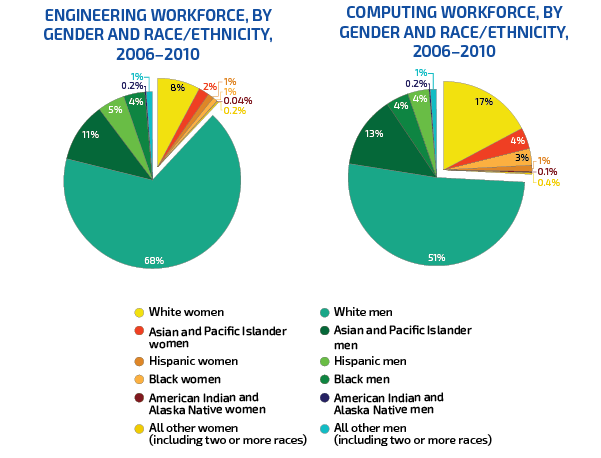 Stereotypes and Bias Are Holding Everyone Back

We all hold gender biases, shaped by stereotypes in the wider culture, that affect how we evaluate and treat one another. Several findings detailed in the report shed light on how these stereotypes and biases harm women in engineering and computing.

One study asks science faculty to evaluate résumés that were identical except for the candidates’ names. The researchers found that scientists were more likely to choose a male candidate over an identical female candidate for a hypothetical job opening at a lab. Both female and male scientists also offered a higher salary to the male candidate and were more willing to offer him mentoring opportunities. 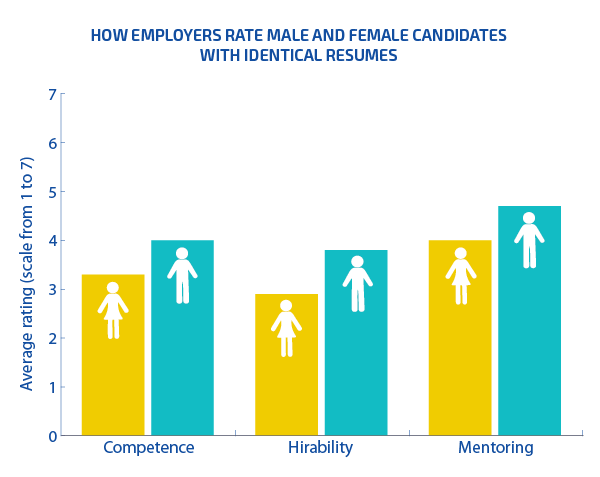 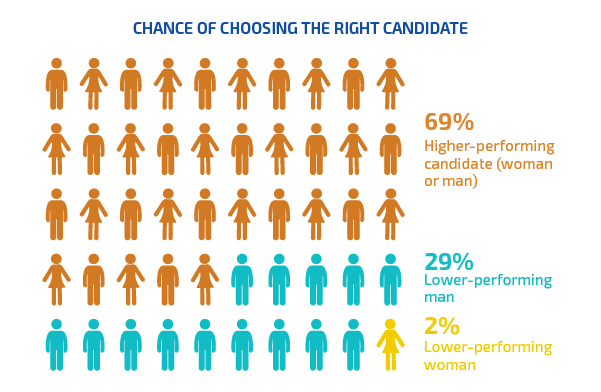 In another study, potential employers systematically underestimated the mathematical performance of women compared with men, resulting in the hiring of lower-performing men over higher-performing women for mathematical work.

But employers aren’t the only ones making this mistake. Stereotypes and biases affect women’s beliefs about their own abilities and the choices they make about their own futures as well. Girls with stronger implicit biases linking math and science with boys spend less time studying math and are less likely to pursue a career in a STEM field.

Show Women That They Are Welcome in These Fields

Women who leave engineering are very similar to women who stay in engineering. The differences are found not in the women themselves but in their workplace environments. Women who left were less likely to have had opportunities for training and development, support from co-workers or supervisors, and support for balancing work and nonwork roles than were women who stayed in the profession.

Women engineers who were most satisfied with their jobs, in contrast, worked for organizations that provided clear paths for advancement, gave employees challenging assignments that helped develop and strengthen new skills, and valued and recognized employees’ contributions. In other words, workplaces with good management practices were more likely to retain women employees.

Harvey Mudd College has dramatically increased the number of women computer science graduates at the school with three simple interventions designed to welcome beginning students into the curriculum rather than weed them out. The college: 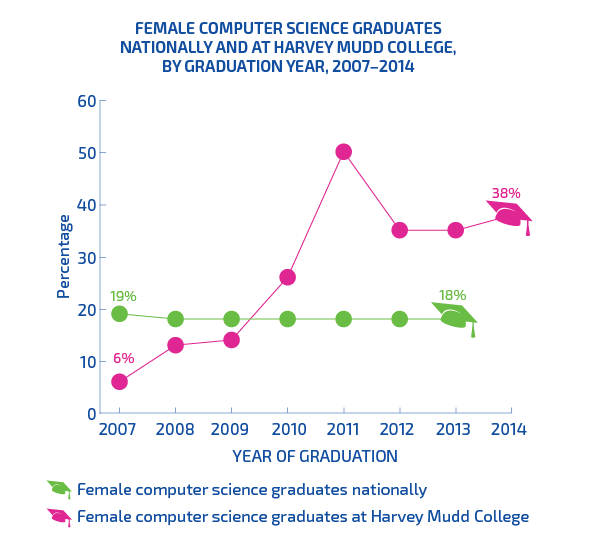 In just five years, the percentage of women Harvey Mudd computer science graduates grew from a historical average of 12 to around 40 percent, while the national average stalled at 18 percent. What if we took the lessons from these efforts and applied them to businesses and K–12 education?

Why Are There Still So Few Women in Engineering Computing?

Everyone can encourage women to enter engineering and computing and help transform these fields into places where more women — and men — want to be.