Homelessness in the US: Sleep Study and Accommodation Directory

Unfortunately, this describes what sleeping is like for the homeless.

The State of Homelessness in the United States

Each year, the U.S. Department of Housing and Urban Development (HUD) releases their annual Homeless Assessment Report. In 2016, they reported:

Fortunately, despite these statistics, the trends suggest that shelters and transitional housing programs work. Between 2015 and 2016, the number of people staying in such programs declined by 5%.

What Factors Contribute to Homelessness?

Once a person finds themselves homeless, it is an uphill battle faced with many challenges. Many things contribute to a person becoming homeless: lack of affordable housing, increasing criminalization of homelessness, and mental illness.

According to the National Law Center on Homelessness & Poverty, there is a serious gap between the amount of affordable housing and rental assistance available, and the amount of people who need such help. Due to budget cuts, tens of thousands of low-income affordable housing units are lost every year. Compared to 2001’s numbers, one-eighth of these housing units are permanently gone.

There’s only enough government-funded public rental assistance to go around for one in four of the low-income households. The remaining 75% find themselves on multi-year waiting lists.

Since the 2008 crisis, over 5 million homes have foreclosed. As you can see from the chart below capturing the homeless population in New York City, there has been a sharp rise in homelessness since then. 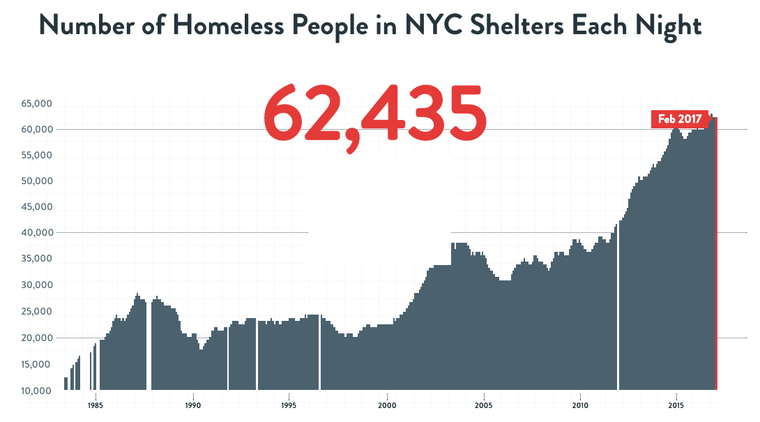 More cities are making homelessness and related activities a crime. Homeless people find themselves caught between a rock and a hard place, with nowhere to go.

According to a 2014 survey of 287 cities by the National Law Center on Homelessness & Poverty, the following activities are illegal in a percentage of cities:

People living with mental illness make up a substantially larger percentage of the homeless population, as reported by the National Coalition for the Homeless. About a quarter of homeless people are estimated to suffer from severe mental illness, as compared to 6% of the general population. Schizophrenia in particular is very common among the homeless.

Many homeless veterans and women suffer from post-traumatic stress disorder (PTSD). Veterans may have PTSD from their time spent in combat. The vast majority of homeless women (as high as 90%) end up homeless when they escape domestic violence or sexual assault, and suffer PTSD from the trauma they experienced.

A good sleep environment requires darkness and quiet. Both are hard to come by when you’re staying in a homeless shelter or sleeping on the street surrounded by varied noise from cars, building noises, and other people.

Sleep is an overlooked issue for homeless people. There are resources, albeit insufficient, for food, shelter, and employment, but not for sleep.

Homeless advocates are always focused on what are believed to be the root causes of homelessness, and providing the basics of food shelter and clothing to those who do without. ...Although those things are important in their own way, they don't affect homeless people with the intensity that sleep does (or the lack thereof). Without a doubt, sleep is the biggest issue for homeless people.- Kevin Barbieux, San Diego-based blogger known as The Homeless Guy

It’s not just about not having a home. Many factors make it difficult for homeless people to get quality sleep, such as:

Sleep deprivation for even just a night or two can vastly affect your productivity and mental processing. Imagine what sleeping for varying amounts in strange environments over several days does to your body, your circadian rhythms, and your mind. It wreaks havoc on your system. Unfortunately, this is the case for many homeless people.

It’s not uncommon for homeless people to start taking drugs to stay awake, and then using different drugs to get themselves to fall asleep – developing a dangerous, unhealthy habit. Although many people drink to help themselves fall asleep, alcohol actually disrupts REM  sleep later in the night, which is vital to getting a good night’s sleep.

People suffering from PTSD, whether a veteran, a victim of sexual or physical assault, or another traumatic reason or event that may have led to the homelessness itself, often have difficulty sleeping. They’re living with paranoia and fear, and are more likely to have nightmares.

Since sleep deprivation makes it more difficult to think clearly, it’s even harder to get a job. Over time, a vicious cycle emerges that makes it more challenging for homeless people to transition to a more stable living environment.

Then, once they find transitional or more stable housing, many homeless people aren’t used to the quiet, so their sleep deprivation can continue even in a more stable setting.

Sleeping in a Homeless Shelter

Emergency shelters were designed to give the homeless a place to sleep for the night. While they provide shelter from environmental hazards such as vermin and extreme weather, they’re not necessarily safe, and they’re certainly not conducive to sleep.

Emergency shelters typically offer a “dormitory” setting where there can be as many as 100 cots or mattresses. Guests may sleep in a shared space with people of the opposite sex, which poses a precarious situation for homeless women.

Some shelters do require guests to be sober and pass a screening process. However, in many a guest finds themselves sleeping among other people who are up making noise talking to themselves or each other, fighting, yelling, drunk, and suffering from hallucinations or mental illness.

70% of those sleeping in a shelter said they felt so tired they couldn’t function normally the following day, according to the National Health Care for the Homeless Council. They reported that their sleep was interrupted due to being woken up by other people’s snoring (64%), their mind racing (51%), fear of physical harm or injury (27%), or voices in their head (10%).

Sleeping on the Street

The main obstacle homeless people face in getting admitted to a shelter is overcrowding. There simply aren’t enough beds. During periods of extreme cold or heat, many emergency shelters open up additional warming beds and cots to accommodate more people.

In some cases, homeless people choose to sleep on the street. If you’re a woman or LGBT, you may not feel safe in a shared dormitory setting.

Pets also pose an issue. For many homeless people, a pet is not only their companion and family, but their main protection against being robbed or attacked. Many shelters prohibit pets, forcing these people to stay on the street.

Every state has resources and shelters available for homeless people. We’ve listed homeless shelters for each state below, in alphabetical order.

All of these shelters offer one of three types of shelter: emergency overnight shelter, day shelter, or transitional housing. Each listing provides the following information:

National and Online Resources for Homelessness

There are a variety of nonprofits and agencies working to research causes of homelessness, provide education, and suggest and fund solutions to end homelessness.

Additional Federal Resources for the Homeless: