Forgot password
Back to all posts — Research Paper Topics

Updated Aug 2021
History is a broad subject with virtually endless possibilities for writing research papers. Interesting, tragic, and inspiring events across various cultures have been happening since the dawn of time, offering many opportunities to analyze and interpret them from different perspectives.

However, since history is so diverse, picking a topic and conducting research comes with many challenges. How can you narrow down the subject to something relevant that captures the reader’s attention and makes room for in-depth analysis? 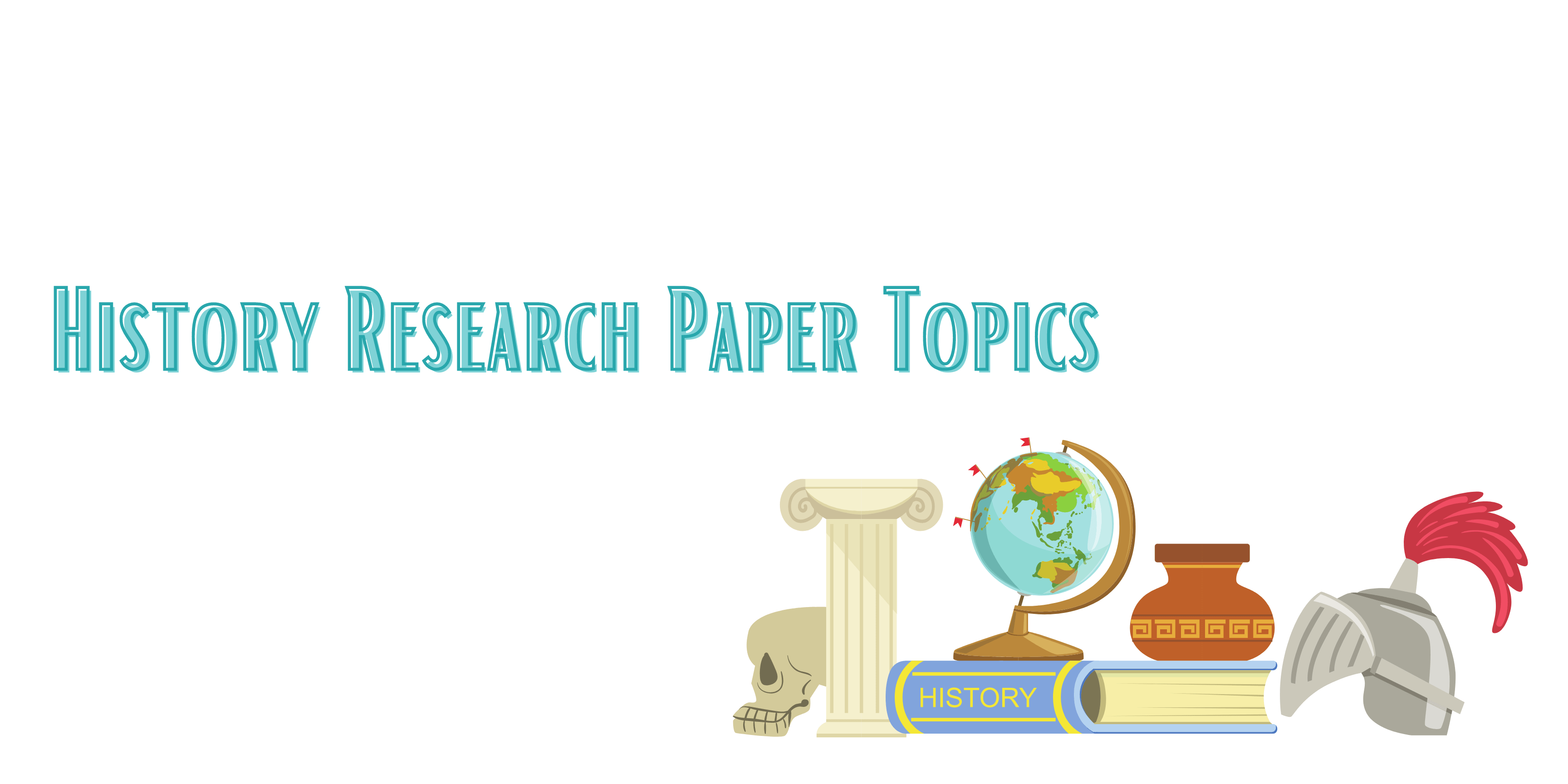 One of the biggest challenges students face when writing history research papers is finding credible sources for research. The online world is full of misinformation, while there are many lengthy books to read through and verify all the facts.

What Is a Good History Research Topic?

A good history research topic tackles a relevant and interesting issue, period, or event that can inform the reader, help them learn from past mistakes, and understand their current position better.

Clarity is one of the essential elements of a good history research topic. Regardless of the period, event, or historical issue you wish to write about, you must be clear about it from the get-go.

A good topic allows you to describe events accurately, grab the reader’s attention, and entice them to want to learn more about it.

It doesn’t matter what topic you choose, as long as it motivates you to write about it in-depth to inspire the reader. When you feel passionate about something, that will reflect on your writing, and the reader will feel that passion as well.

History research papers can be analytical, comparative, argumentative, or reflective, so be sure to pick a writing style that best suits your topic and main idea.

Some of the most exciting history research topics might be those that you can connect to the world today. You know what they say about history repeating itself, so you might be able to relate a past event or issue to current economic or cultural patterns or potential situations.

Use these tips to pick an interesting history research topic:

So, dig deep into what you feel passionate about, narrow down your topic, clear your focus, pick your preferred writing style, prepare a clear outline, and your paper will practically start writing itself.

A lot of interesting history topics one can write about usually revolve around very controversial issues that can be logically explained by representatives of both sides of the argument. The thing is, for you, as a history student, it’s not a good idea to dive into the emotional or personal context of those ideas that caused a lot of turmoil back then. Your task here is to explain the conditions under which they are now perceived as controversial, what helped them to take place, and the causative-consecutive relations of this event to many others. Opinion papers, of course, are a different topic to be discussed but when we’re talking about pure scientific research, you better refrain from undocumented or unproven claims when dealing with history research paper topics.

It’s truly an interesting time to be alive as we witness so many important events and are their contemporaries. It also gives more work for historians as their job is to document them from every possible viewpoint, and your school assignment is pretty much a part of it. There’s an option to pay for a research paper, but if you are ready to write it yourself, we have some topics for you to consider.

The history of the United States is so rich that college students absolutely have to study it. Here we have some good ideas to help you.

The US South was always in the spotlight on many social transformations and challenges. This is why it’s worthy to study it more.

The U.S. revolution history before 1877 and its state during the 20th century are of particular interest for many college students, and they have their reason for it.

Before we know the US as it’s now, it was a bunch of territories under various European countries.

From slavery issues to music to protests - African-American history is full of events that are rarely interpreted objectively and are given the importance they should have been.

From World Wars, mayhem and peace of the 1960s, recovery of the 1920s, and globalization - the last century is a well of topics to explore with research paper writing service or without one.

The civil Rights movement was amongst the most important social movements the USA had, as it’s changed the nation’s discourse.

The recent events in European history make quite a field for history students to explore and work on.

The early civilizations of ancient Egypt, Rome, Greece, Persia, Babylon, China are the sources of culture we have today. That’s why it’s important to learn about them or from them.

Any Western civilization is the beginning of the cultural heritage we cherish now on the European continent and beyond. Here are a few history research topics examples you might be willing to research.

Medieval times are often strongly associated with the church’s influence on every sphere of life and it makes sense to study where it all led us.

These ideas are your chance to explore the rich history of Native Americans from their origin to the present day and get custom research paper writing help you need now.

The history of Puritans is marked with the cruelest court trials one can imagine. See how many issues still remain uncovered.

A truly disgraceful period of the American nation and around the world that needs more public talking than ever before.

The Black people in America suffered a lot of repressions until the 70s, and those policies are claimed as the tragic social norms that people implemented back then. However, we should not underestimate the cultural influence they’ve brought to the continent.

If the only help with research paper on the Civil War you need is to choose the topic, here comes your wish.

The event that still echoes with the disastrous consequences should be studied to avoid the same political mistakes in the future.

WWI had a lot of events that need to de addressed, as many of them seem to repeat themselves throughout the 20th century.

Art is an important part of human existence as it preserves the history and helps historians to learn more about the life and culture of the given period.

Since music and lyrics group together, it stopped being an option for recreation and has obtained more social and political context to it. Explore the following themes, and you’ll learn how the social struggles were reflected in the music of the last century.

Being one of the oldest entertainments, the theater still remains an important historical object for research and it’s undergone many transformations since that time.

If you want to write about events that happened from the 17th century onward, here are some of the most interesting modern history research topics you can choose.

There’s no shortage of controversial topics when it comes to history. When tackling one, it’s crucial to stay impersonal and weigh arguments on both sides. Here are some ideas you could use.

Writing a research paper about any historical event or period can be daunting, especially if you’ve never done it before. Fortunately, professional research paper writing services like StudyClerk can help you out with any subject and topic.

Here at StudyClerk, we have an expert team of qualified writers with Ph.D. and Master’s degrees in an array of academic fields. They can do all the legwork for you regarding research, provide you with a clear outline, and help you write a superb paper without a hitch. And if you ever need any editing, proofreading, or formatting assistance, reach out to us anytime.

Browse our writers’ profiles, pick one that best suits your needs, and share details about your paper, including the topic, main idea, length, and deadline. Sit back, relax, and get an original, plagiarism-free research paper that will exceed your expectations. Contact us today to place your order!