In order to frack, an enormous amount of water is mixed with various toxic chemical compounds to create frack fluid. This frack fluid is further contaminated by the heavy metals and radioactive elements that exist naturally in the shale. A significant portion of the frack fluid returns to the surface, where it can spill or be dumped into rivers and streams. Underground water supplies can also be contaminated by fracking, through the migration of gas and frack fluid underground.

In order to hydraulically fracture shale and extract the hydrocarbons, large quantities of water and chemicals must be injected underground. Thus fracking can pose a threat to local water resources, especially in areas where water is already scarce like the Barnett shale in Texas. In the Marcellus Shale region, the most expansive shale play in the United States, 2 to 10 million gallons of water are needed every time a well is fractured. Because wells can be fractured multiple times, the total amount of water used for fracking is unknown and can vary by location and technology. In western states like Texas and Colorado, over 3.6 million gallons are needed per fracture. In 2010, the U.S. EPA estimated that 70 to 140 billion gallons of water were used to fracture just 35,000 wells in the United States, more than was used by the city of Denver, Colorado in the same time period. As of 2012, the fracking industry has drilled around 1.2 million wells, and is slated to add at least 35,000 new wells every year. (Jeff Goodell, “The Big Fracking Bubble: The Scam Behind the Gas Boom,” Rolling Stone 3/12/12 )

Because of the cost to truck water in from further away, companies prefer to use water from sources as close to the well as possible, which can result in significant impacts on local waterways and overburden local water treatment facilities. In Texas, which is suffering dangerous drought conditions, fracking continues even as water use by citizens is restricted, the landscape wilts and the animal life dies. In 2011 the Wall Street Journal reported that the diversion of water for fracking oil and gas wells is also a serious threat to ranchers and other businesses in Texas. (Russell Gold and Ana Campoy, “Oil’s Growing Thirst for Water," Wall Street Journal, 12/6/2011)

Because of the tremendous amount of water needed for hydraulic fracturing, fresh water must be acquired, transported, and stored for every well pad.  To manage the massive amounts of water necessary for the hydraulic fracturing process, drillers build large open air pits called impoundments next to the well pads, to store the water before it is used and after it returns to the surface.

There are two types of impoundments, those that hold drilling waste, used while drilling the well bore, and impoundments for the fracking fluid. The frack fluid pits are larger and contain toxic fracking fluid.  These open pits have been linked to animal deaths and health effects in humans.
In Texas, which has few laws regarding wastewater disposal, there is no requirement to line the pits to prevent seepage.

Some companies have disclosed the contents of their frack fluid in response to community concerns and congressional pressure.  In April 2011, an industry group known as the Interstate Oil and Gas Compact Commission launched www.fracfocus.org a web-based disclosure database for wells drilled after 2010.  In addition, a Congressional investigation found that between 2005 and 2009 oil and gas service companies used 29 different chemicals in their fracking fluid known to cause cancer or other health risks. (House Energy and Commerce Committee, “Chemicals Used in Hydraulic Fracturing,” April, 2011)

Gas companies routinely claim that frack fluid is harmless because the concentration of chemical additives is low, about two percent.  But just 2% of the billions of gallons of frack fluid created by gas drillers measures up to the use of hundreds of tons of toxic chemicals.  A 2011 report to Congress estimated that from 2005 to 2009, 14 leading fracking companies used (before mixing with water) 780 million gallons of 750 different chemicals. (House Energy and Commerce Committee, Minority Staff Report, “Chemicals Used in Hydraulic Fracturing,” April, 2011)

Drilling wastewater is so poisonous, when a gas company that legally doused a patch of West Virginia forest with salty wastewater from a drilling operation, it killed ground vegetation within days and more than half the trees within two years. Wastewater from fracking has also been linked to livestock and family pet deaths across the country.

Moreover, many chemicals used in fracking have been documented to have deleterious health effects at small levels of exposure.

Some of the chemicals that comprise frack fluid are highly toxic and cancer causing, like Benzene, Toluene, 2-butoxyethanol (a main ingredient to anti-freeze and oil dispersants), and heavy metals. The Endocrine Disruptor Exchange(TEDX)identified 353 chemicals used in fracking, many of which can cause cancer and other serious health, even in small doses.

Once the frack fluid mixture is injected into the ground it can also pick up or entrain further contaminants, like radium, a cancer-causing radioactive particle found deep within the Marcellus and other shales.  Radium has a half life of over 1,000 years and is produced from Uranium, which has a much longer half life.  Because Radium is water soluble, all frack fluid used in the Marcellus Shalebecomes radioactive to some degree.

One of the gravest threats posed by fracking is the contamination of drinking water wells, vital sources of water for many rural communities.  Though the industry has attempted to obscure evidence of well water contamination by fracking, multiple instances have come to light.

In spite of the evidence, the oil and gas industry routinely claims that fracking has never resulted in water contamination.

Groundwater becomes contaminated by hydraulic fracturing in a number of ways, including leakage from liquid storage areas, leakage from injection wells, leakage during hydrofracking along faults or up abandoned wells, seepage into the ground when wastewater and residuals are applied to land (i.e. used for irrigation or on roads for dust suppression or de-icing), and other means. (US EPA, Science Advisory Board, Hydraulic Fracturing Review Panel, report to Lisa P. Jackson, August 4, 2011). 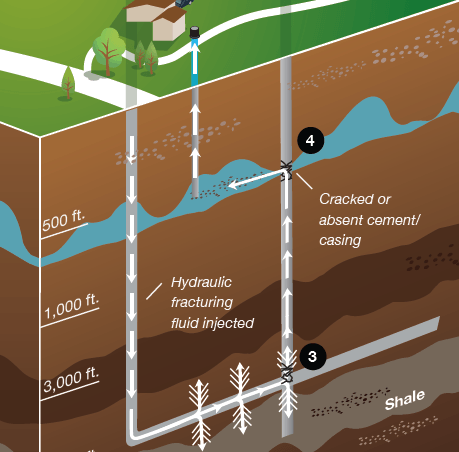 The cement casing which rings the well bore and goes through underground aquifers is meant to act as a barrier between underground water and the shaft through which frack fluid and gas flow.  But the casing can fail or break during the fracturing process, allowing the frack fluid or naturally-occurring contaminants to contaminate groundwater.  When that happens, frack fluid and methane can leak from the well bore directly into the water supply, causing dangerous gas buildups, and making water unfit to drink. (Abrahm Lustgarten and ProPublica, Drill for Natural Gas, Pollute Water, Scientific American, 11/17/2008)

Even if the cement casings hold, gas can travel up from the shale layer to the water table. When gas travels through fractures in the rock layer above the shale and in to water supplies, it is called gas migration.  (Abrahm Lustgarten and ProPublica, “Does Natural Gas Make Water Burn?” Scientific American, 4/27/09)

It is common for wells to lose pressure during the fracking stage, which indicates that the frack fluid is not contained within the well and is seeping into some place the drillers did not anticipate.  There has not been enough study of this phenomenon, even though drillers indicate it happens on a frequent basis.

Disposal of the toxic and sometimes radioactive frack fluid is a major logistical problem for fracking companies.  When a well is hydraulically fractured, somewhere between 18 and 80 percent of the frack fluid injected into the well will return to the surface.  This water, called “flowback” is heavily contaminated by the chemical mixtures that comprise the frack fluid, as well as dissolved salts and heavy metals from deep within the earth.  Estimates from the industry indicate that drillers in Pennsylvania created approximately 19 million gallons of this wastewater per day in 2011. The Susquehanna River Basin Commission estimates 20 million gallons per day (MGD) for that same timeframe. (Permitting Strategy for High Total Dissolved Solids Wastewater Discharges,4/11/2009)
There is currently no comprehensive set of national standards for the disposal of fracking wastewater.
(see “Halliburton Loophole”).

The presence of certain contaminants commonly found in fracking wastewater — including bromide (which can create toxic by-products) and radionuclides, as well as Total Dissolved Solids (TDS) like salts (for which conventional wastewater treatment is largely ineffective) — are of major concern not only because of the potential impacts on rivers, streams and groundwater, but also for downstream water treatment plants, where conventional treatment technologies are not equipped to deal with such contaminants.  According to US EPA, “only a limited number of Publicly Owned Treatment Plants (POTWs) have the ancillary treatment technologies needed to remove the constituents in hydraulic fracturing return waters.” (US EPA, Science Advisory Board, Hydraulic Fracturing Review Panel, report to Lisa P. Jackson, August 4, 2011).

Because of lax regulation, fracking companies commonly dispose of contaminated fracking water in the cheapest, easiest ways they can find, regardless of the consequences for communities, water treatment facilities, and the environment.  This has led to abuses of waterways and communities close to frack sites.

The New York Times reported that in Pennsylvania, wastewater contaminated with radium and other carcinogens was dumped upstream from the intake pipe of a drinking water plant. (Ian Urbina,“Regulation Lax as Gas Wells’ Tainted Water Hits Rivers,” New York Times, 2/26/2011) 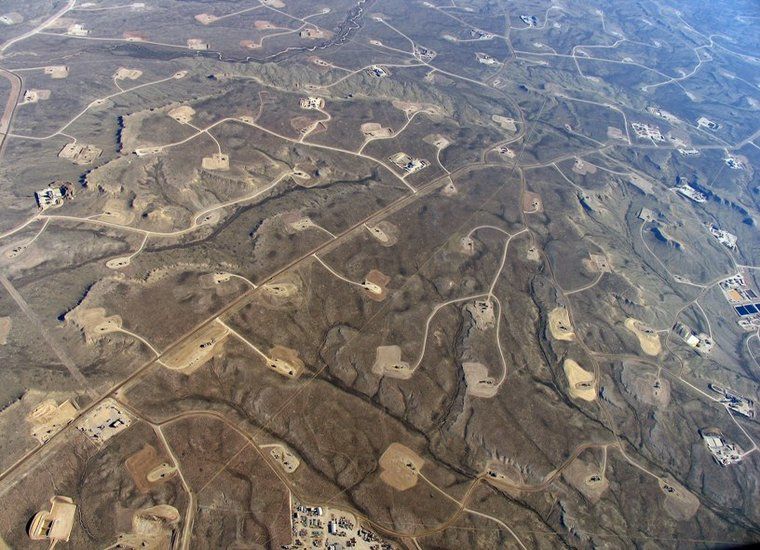 The solid waste left over from evaporation pits and land application is treated as ordinary solid waste and exempt from many federal and state regulations, though it can contain toxic residue from the frack fluid. (Ian Urbina, “Recycling of fracking wastewater is no cure-all,” New York Times, 2/2/2011)  Drillers are permitted to apply fracking wastewater residues to roads for de-icing and dust suppression in states like Pennsylvania and New York, and allowed to spray it into the air over tracks of land used for agriculture in Texas.

In 2015, a Greenpeace investigation found that the shale industry had undue influence on EPA’s study of fracking’s impact on groundwater.