Are Millennials the Screwed Generation?

Today’s youth, both here and abroad, have been screwed by their parents’ fiscal profligacy and economic mismanagement. Neil Howe, a leading generational theorist, cites the “greed, shortsightedness, and blind partisanship” of the boomers, of whom he is one, for having “brought the global economy to its knees.”

How has this generation been screwed? Let’s count the ways, starting with the economy. No generation has suffered more from the Great Recession than the young. Median net worth of people under 35, according to the U.S. Census, fell 37 percent between 2005 and 2010; those over 65 took only a 13 percent hit.

The wealth gap today between younger and older Americans now stands as the widest on record. The median net worth of households headed by someone 65 or older is $170,494, 42 percent higher than in 1984, while the median net worth for younger-age households is $3,662, down 68 percent from a quarter century ago, according to an analysis by the Pew Research Center. 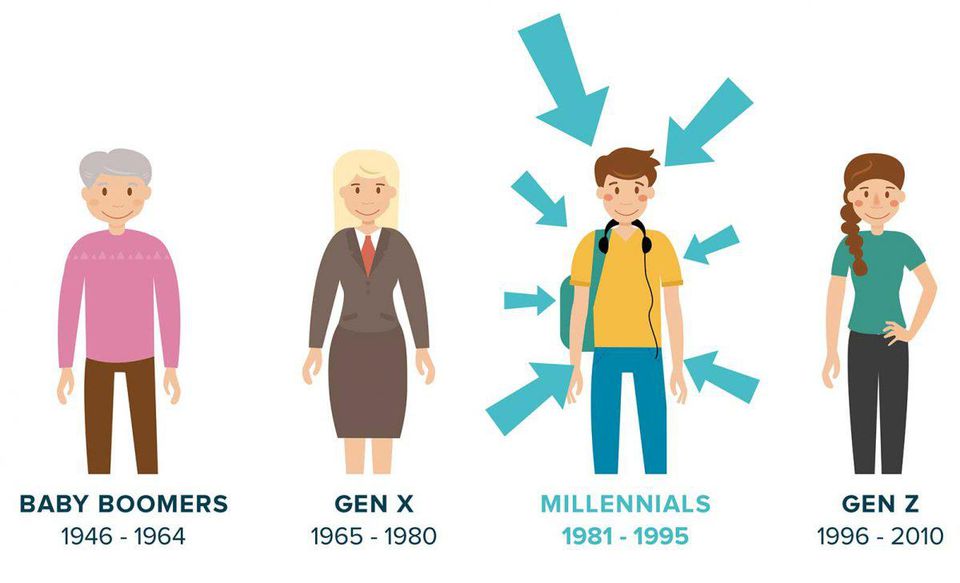 The older generation, notes Pew, were “the beneficiaries of good timing” in everything from a strong economy to a long rise in housing prices. In contrast, quick prospects for improvement are dismal for the younger generation.

One key reason: their indebted parents are not leaving their jobs, forcing younger people to put careers on hold. Since 2008 the percentage of the workforce under 25 has dropped 13.2 percent, according to the Bureau of Labor Statistics, while that of people over 55 has risen by 7.6 percent.

“Employers are often replacing entry-level positions meant for graduates with people who have more experience because the pool of applicants is so much larger. Basically when unemployment goes up, it disenfranchises the younger generation because they are the least qualified,” observes Kyle Storms, a recent graduate from Chapman University in California.

The screwed generation also enters adulthood loaded down by a mountain of boomer- and senior-incurred debt—debt that spirals ever more out of control. The public debt constitutes a toxic legacy handed over to offspring who will have to pay it off in at least three ways: through higher taxes, less infrastructure and social spending, and, fatefully, the prospect of painfully slow growth for the foreseeable future.

In the United States, the boomers’ bill has risen to about $50,000 a person. In Japan, the red ink for the next generation comes in at more than $95,000 a person. One nasty solution to pay for this growing debt is to tax workers and consumers. Both Germany and Japan, which appears about to double its VAT rate, have been exploring new taxes to pay for the pensions of the boomers.

Then there is the debt that the millennials have incurred themselves. The average student, according to Forbes, already carries $12,700 in credit-card and other kinds of debt. Student loans have grown consistently over the last few decades to an average of $27,000 each. Nationwide in the U.S., tuition debt is close to $1 trillion.

This debt often results from the advice of teachers, largely boomers, that only more education—for which costs have risen at twice the rate of inflation since 2000—could solve the long-term issues of the young. “Our generation decided to go to school and continue into even higher forms of education like master’s and Ph.D. programs, thinking this will give us an edge,” notes Lizzie Guerra, a recent graduate from San Francisco State. “However, we found ourselves incredibly educated but drowning in piles of student loans with a job market that still isn’t hiring.”

More maddening still, the payback for this expensive education appears to be a chimera. Over 43 percent of recent graduates now working, according to a recent report by the Heldrich Center for Workforce Development, are at jobs that don’t require a college education. Some 16 percent of bartenders and almost the same percentage of parking attendants, notes Ohio State economics professor Richard Vedder, earned a bachelor’s degree or higher.

“I work at the Gap and Pacific Pak Ice, two jobs that I don’t see myself working long term nor jobs that are specific to my major,” notes recent University of Washington graduate Marshel L. Renz. “I’ve been applying to five jobs a week and have gotten nothing but rejections.”

Particularly hard hit are those from less prestigious schools or with majors in the humanities, notes a recent Pew study. Among 2011 law-school graduates, half could not find a job in the legal field nine months after finishing school. But it’s not just the lawyers and artists who are suffering. Overall the incomes earned by graduates have dropped over the last decade by 11 percent for men and 7.6 percent for women. No big surprise, then, that last year’s class suffered the highest level of stress on record, according to an annual survey of college freshmen taken over the past quarter century.

The proliferation of graduate degrees also impacts those many Americans who don’t go (or haven’t yet gone) to college. High-school graduates now find themselves competing with college graduates for basic jobs in service businesses. Unemployment among 16- to 19-year-olds this summer is nearly 25 percent, while for high-school graduates between 2009 and 2011, only 16 percent have found full-time work, and 22 percent work part time.

Once known for their optimism, many millennials are turning sour about the future. According to a Rutgers study, 56 percent of recent high-school graduates feel they would not be financially more successful than their parents; only 14 percent thought they’d do better. College education doesn’t seem to make a difference: 58 percent of recent graduates feel they won’t do as well as the previous generation. Only 16 percent thought they’d do better.

This perception builds on the growing notion among economists that the new generation must lower its expectations. Since the financial panic of 2008, “the new normal” has become conventional wisdom. Coined by Mohamed El-Erian at Pimco, it’s been used to describe our world as one “of muted Western growth, high unemployment and relatively orderly delevering.”

The libertarian Tyler Cowen, in his landmark work The Great Stagnation, makes many of the same points, claiming that the U.S. “frontier” has closed both technologically and in terms of human capital and resources. He maintains that we’ve already harvested “the low-hanging fruit” and that we now rest on a “technological plateau,” making any future economic progress difficult to achieve. Stagnation is not such a bad thing for people already established in college-campus jobs, think tanks, or powerful financial institutions. But it wipes out the hope for the new generation that they can achieve anything resembling the American Dream of their parents or even grandparents.

Inevitably, young people are delaying their leap into adulthood. Nearly a third of people between 18 and 34 have put off marriage or having a baby due to the recession, and a quarter have moved back to their parents’ homes, according to a Pew study. These decisions have helped cut the birthrate by 11 percent by 2011, while the marriage rate slumped 6.8 percent. The baby-boom echo generation could propel historically fecund America toward the kind of demographic disaster already evident in parts of Europe and Japan.

The worst effects of the “new normal” can be seen among noncollege graduates. Conservative analysts such as Charles Murray point out the deterioration of family life—as measured by illegitimacy and low marriage rates—among working-class whites; among white American women with only a high-school education, 44 percent of births are out of wedlock, up from 6 percent in 1970. With incomes dropping and higher unemployment, Murray predicts the emergence of a growing “white underclass” in the coming decade.

The prospect of downward mobility is most evident in recent discussions about the future of the housing market. Since World War II the expectation of each generation was to own property, preferably a single-family house. The large majority of boomers became homeowners during the Reagan-Clinton era. Yet it is increasingly fashionable to insist this “dream” must be expunged. If millennials ever move out of their parents’ house, they will live in apartments they don’t own. There’s a lot of talk about a “generation rent” replacing a primarily suburban ownership society with a new caste of city-dwelling renters. “I’m hoping that the millennial generation doesn’t set its sights on homeownership as a benchmark of economic stability,” sociologist Katherine Newman suggests, “because it’s going to be out of reach for so many of them.”

No doubt the prospects for homeownership will be tough in the years ahead. But it’s delusional to believe millennials don’t desire the same things as previous generations, note generational chroniclers Morley Winograd and Mike Hais. Survey research finds that 84 percent of 18- to 34-year-olds who are currently renting say that they intend to buy a home even if they can’t currently afford to do so; 64 percent said it was “very important” to have an opportunity to own their own home.

And where do millennials see their dream house? According to research at Frank Magid Associates, 43 percent describe suburbs as their “ideal place to live,” compared with just 31 percent of older generations. Even though big cities are often preferred among college graduates in their 20s, only 17 percent of millennials say they want to settle permanently in one. This was the same percentage of members of this generation who expressed a preference for living in rural or small-town America.

So far, the Great Recession has driven young people around the high-income world to the left. Generations growing up in recessions appear more amenable to arguments for government-mandated income redistribution. And since so few young people pay much in the way of taxes, they are less affronted by the prospect of forking over than older voters, who do. This left-leaning tendency has been on display in recent European elections. In France, 57 percent voters 18 to 24 supported the Socialist François Hollande, one of the reasons why the conservative Nicolas Sarkozy lost. Similarly, 37 percent of those in that age category voted for Syrizia, the far-left party in Greece.

Yet Republicans may take heart from some of the more conservative values embraced by the young. As a group, millennials appear to be very family-oriented—being good parents is often their highest priority—and roughly two thirds claim to believe in God. And since their long-term aspirations are not so different from those of earlier generations—they still want to own a home in a nice, secure neighborhood—Republicans could make a case that their economic model will work better with their personal goals.

Right now, politics is just another place where American millennials are getting screwed. Republicans want to deport young Latinos while cutting investments, such as roads and skills education, that would benefit younger voters. Democrats, meanwhile, seem determined to mortgage the future with high spending on pensions, predominantly for aging boomers; cascading indebtedness; and economic policies unfriendly to the rapid growth necessary to assure upward mobility for the new generation.

This suggests millennials need to force the parties to cater to them and play hard to get. Being taken for granted, as African-Americans have been, does not always produce the best results for any demographic grouping. Politicians target “soccer moms,” “independents,” and suburban voters precisely because they are not predictable. Millennials should not want to be in anyone’s hip pocket.

Wanting the next generation to succeed is in everyone’s long-term interest. Eventually they will constitute the majority of parents, potential homeowners, and workers. This year they will comprise 24 percent of voting-age adults, up from 18 percent in 2008; by 2020 they will amount to a third of all eligible voters. And if, by then, they are still a screwed generation, they won’t be the only ones suffering. America will be screwed, too.